A Day In Corner Brook Newfoundland

An eventful day spent in the metropolis of Corner Brook, Newfoundland, Canada. 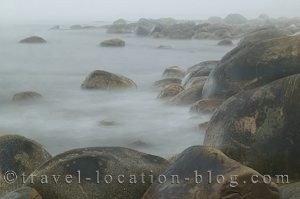 Photo of large boulders along the coast of the
Humber Arm near Corner Brook, Newfoundland, Canada,

June 1, 2007:
Today was spent waiting ... mostly! We had two major things to attend to in the town of Corner Brook. One was to have our burnt out water pump fixed .. or um replaced ... already, second was to have the truck serviced after hauling the camper and us clean across Canada.

We lifted the jacks on the camper and left our beautiful campsite at Bottle Cove for the 30 minute drive back to Corner Brook. Not sure if we've mentioned yet or not but the roads here are ... let's say ... interesting - especially with a pick up camper on the back, you notice every pothole and bump.

First stop was the RV Dealer who we found by accident while looking for the Ford dealer. The folk at Marble RV were most helpful and were able to fit us in, short notice, to have our water work issues sorted out. The chap who worked on it for us actually has his own business called 'The RV Guy' since that is what most people call him when he turns up to fix things.

Since our truck wasn't scheduled for a service till later in the afternoon, we sought out a cafe for brunch and coffee. We found a delightful place called Cafe Broadway on Broadway Street of course. The hostesses are extremely friendly and the food was great - not to mention very reasonably priced.

After brunch we headed to the Ford dealer. What was meant to be a half hour oil change and service turned out to be a 2 1/2 hour deal. While waiting for the truck to be serviced we took care of the grocery shopping which was across the road. Finally we got our truck back but by that time it was raining - torrentially!! Great ... we had to try and load the camper back on the truck in the pouring rain!

After that 1 hour drama, we were finally on the road again but since it was already 7pm we decided not to travel too far and pulled into Pineridge Campground in the town of Pasadena not far from Corner Brook.

The friendly folk at the Pineridge Campground sorted us out with a site and then arranged a late dinner for us. It was nice to sit down with a beer and relax after a crazy day. A quick call to Michelle's parents in New Zealand was made before turning in for the night.

Just as we were heading to bed, we heard music coming from our neighbours - low at first! After about an hour it had crept up in volume. At first we thought it was hilarious, they were listening to 'Living next door to Alice', adding their own little highlights to the song (which we won't elaborate on - it's a family blog after all). By 3am we were far from asleep and just a lot irritated. A little sing along had turned into a full scale party with quite a lot of guests and, by then, drunken fools!

We had gone from a beautiful quiet campsite the night before in Bottle Cove to this - have mercy!!!

These travel blog entries related to A Day In Corner Brook Newfoundland may interest you too:

More Waterfalls And Penguins In The Catlins New Zealand