We drove nearly 500 kilometres today from the town of Red Lake in Ontario to the bustling metropolis of Winnipeg in Manitoba, Canada. 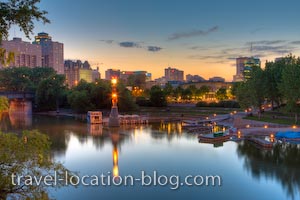 Photo of the Forks National Historic Site at dusk
in the city of Winnipeg, Manitoba, Canada.

June 17, 2008:
Besides the black bear on the side of Highway 105 shortly after leaving Red Lake today, the rest of the trip was relatively uneventful. We reached the Trans-Canada Highway and just put the truck into cruise control until we drew closer to the Provincial border of Manitoba.

We stopped briefly at the Visitor Information Centre to pick up maps and up to date information about Manitoba as well as Winnipeg then hit the road again for the final 160 kilometres to the city.

Once we were on the outskirts of Winnipeg, we turned off the Trans-Canada highway onto the Perimeter Highway - since we were early we had time to check in to the Conestoga Campground which is one of the closest campgrounds to the city centre, before heading into town for sunset and dusk.

Well the Perimeter Highway is a great idea for avoiding the inner city roads but "boy howdy" talk about bumpy. It was like driving on a wave which was accentuated by us driving in a pick up truck with a camper on the back ... next stop the chiropractor!!

We turned off the Perimeter Highway and found our way to the Conestoga Campground on St Anne's Road and checked in. After locating our site, we decided the length of our stay in Winnipeg warranted taking the camper off the back of the truck, so we worked quickly to unload it and get it plugged in before heading off into town to find a spot for sunset and dusk. We decided on the Forks National Historic Site which is located in downtown Winnipeg. The Forks NHS is situated right at the confluence of the Assiniboine and Red Rivers and is a place of great historic significance in the city. It has been a meeting place for centuries - for aboriginal peoples, traders, and for residents of Winnipeg.

After capturing images of the sculptures at the Oodena Celebration Circle, we set up the camera and tripod on the Historic Rail Bridge which spans the Assiniboine River and affords a view back towards the markets and marina of the Forks National Historic Site.

We stayed at this location until after dark then headed home to Conestoga Campground on the outskirts of town to where the camper was set up and waiting for us.

These travel blog entries related to Bumps And Forks In Winnipeg Manitoba Canada may interest you too: