History is everywhere in and near Churchill, from shipwrecks to crash landed planes called Miss Piggy. 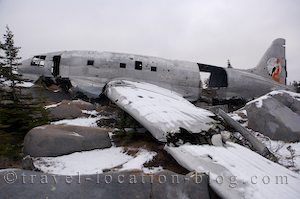 October 25, 2007 (continued):
On the way back to our Bed and Breakfast we stopped in at Miss Piggy for a closer look.

Miss Piggy is a Curtiss C-46 Commando which crash landed in November 1979. The plane was named Miss Piggy because of the sheer abundance of cargo she was able to carry, also at one stage she did have a cargo of pigs.

On the fateful day, Miss Piggy had a cargo of 1 snowmobile and many cases of soda drinks to be delivered to Chesterfield Inlet.

The plane had mechanical problems after taking off from Churchill and was returning to the Churchill Airport to land but came down several kms shy of the landing strip. She came to rest on a rocky cliff after topping a few trees and taking out power lines. Fortunately there were no fatalities but two of the three crew were seriously injured.

Miss Piggy is found on a scenic back road which skirts the shores of Hudson Bay between the town of Churchill and its airport. The plane is featured as an attraction on the Churchill tourist map.

These travel blog entries related to Miss Piggy Churchill Manitoba may interest you too: