The city of St John's sure has a lot to offer the visitor from the famous Signal Hill Tattoo to Lighthouses at the most easterly point of North America! 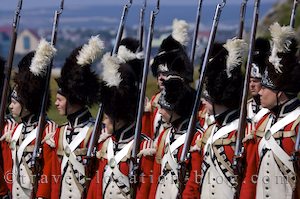 Photo of the Grenadier Company demonstration during
the Signal Hill Tattoo in St John's, Newfoundland.

July 28, 2007:
After a leisurely late breakfast, we cruised across town in the small car which our friends generously offered to us on loan - a luxury to drive through a city in a small vehicle! We are usually concerned about low hanging power lines above the roads, or narrow streets (which sometimes we end up having to back out of) not such a pleasure in a large camper!

First thing on our agenda was to watch the famous Signal Hill Tattoo beginning at 11:00am. The performance features drumming and fife routines, rifle displays, and marching by military personnel. The Tattoo takes place each Wednesday, Thursday, Saturday and Sunday at 11:00am and 3:00pm at the Signal Hill National Historic Site, beside the interpretative centre. Since the tattoo is an outdoors event, it is dependent on the weather.

In true military style, the Tattoo got underway bang on 11:00am with a marching routine by the Drummers and Fife players who on top of playing a series of rhythmic tunes, also marched in formations. Next up was the Infantry who, by the beat of a drum, performed their version of linear military maneuvers - marching in unison out onto the field while welding their muskets and bayonets. Soon a mock battle broke out which also called for the back up of the Royal Regiment of Artillery. It was gun and canyon fire all round!!

At the conclusion of the battle, the audience stood during the lowering of the flag and were then able to have pictures taken with and talk to the costumed performers. The Signal Hill Tattoo is well worth the visit and after the performance a short trail (or you could drive) will take you to the top of the hill to where the Cabot Tower is situated. The tower offers stupendous views of the St John's Harbour, City, and the coastline towards Cape Spear - our next destination.

We headed through the city of St John's then picked up the Cape Spear Drive, a slightly bumpy road which would take us to the most easterly point of land in North America. It is also the location of Newfoundland's oldest surviving lighthouse which has been designated a National Historic Site in Canada. The weather definitely wasn't co-operating so the site was shrouded in thick fog and was being battered by forceful winds! After checking out the interior of the lighthouse keepers house with its fake windows and interesting architecture we decided to head off to drive a little of the Irish Loop road. The quaint town site of Petty Harbour was once a thriving fishing community but like most coastal communities in Newfoundland, their mainstay industry was abolished by the Canadian Government declaring a moratorium on cod fishing. On to Bay Bulls, a town which has replaced fishing with tourism and is now the departure point for tours to the Witless Bay Ecological Reserve - home to millions of sea birds.

Back in St John's, we couldn't pass up the opportunity to take in a tour through the famous Gorch Fock, a beautifully designed German Navy training sailing ship which had sailed across the Atlantic Ocean on a training run. We were told by one of the trainee sailors that they had encountered a severe storm during the crossing which had the ship pitching so far over that another 5 degrees and it would have been on its side! Scary stuff!!

Before calling it a day, we headed over to Fort Amherst on the south side of the entrance to the St John's Harbour. The current lighthouse at Fort Amherst is the third to occupy the site - the first was built in 1813. The trail to the lighthouse actually starts about 500 metres away - the road beyond the carpark has no turnaround. During the walk we were disappointed to see the results of the sewer discharge of the city into the harbour - aparently if you fall in you need a whole series of inoculations and we could understand why. It is the 21st century now!

With dinner plans that night, we decided to head back a little early and enjoyed a delightful dinner with friends!

These travel blog entries related to Tattoos Lighthouses And Ships Of St Johns may interest you too: