We're on our way to the Avalon but study the kamikaze behaviour of capelin fish enroute, then check out where history was made in the world of communications. 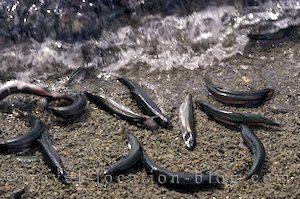 Picture of spawning Capelin beaching themselves
on the beach at Admiral's Point.

July 25, 2007:
At the end of the road where we camped last night is the Admiral's Point Light which is also the location of the Admiral's Point Historical Trail. This finger of land has been occupied by various cultural groups over the years including the Dorset Eskimos, English fisherman and the French. It received it's name from the fact that the captain of the first vessel to arrive in a Newfoundland harbour became the "Fishing Admiral" for that season. As well as ruling on any disputes that arose among the seasonal population, the Fishing Admiral would also select the best location, such as the inside of this point for their base. Gradually the site became known as Admiral's Point and the beach was Admiral's Beach.

The trail features a number of cannon guns which were a part of the 18-gun fortification constructed on the point by the English in the early 1700's, after an increasingly unstable relationship between England and France. There are also the rocky remains of a Storekeepers Hut, Storehouse, and Magazine.

As we wandered back to the camper along the trail we saw a massive number of Capelin washing up on the beach below. Capelin is a small fish which provides a staple food source for humans, many marine animals, and sea birds. They seemed to be beaching themselves so we deviated from the track and headed down to check it out. During June and July, massive numbers of Capelin run aground in a spawning frenzy, then twist and writhe in an effort to return to the ocean once the deed is done. The mortality rate is extremely high as we could see from the piles of capelin that littered the beach - those that were not fortunate enough to return safely. The water near the shoreline was black and boiling with more capelin awaiting their turn to risk life and fin to act out the necessary deed and ensure the future of the species.

It was a fascinating sight, but time was ticking so we continued on with our journey - we wanted to reach the Avalon Peninsula that night. We headed along Highway 230 and hooked up with the Trans Canada Highway again and turned towards the town of Clarenville in the hopes to pick up some supplies. Unfortunately for us, but fortunately for residents of the town, it was Clarenville Days - an annual event which basically closes down the whole town including grocery stores (with the exception of a few gas stations). So we couldn't stock up there as planned.

Luckily we have some back up food on board, so flagged the idea of getting supplies and headed straight for the Avalon. We turned onto Highway 80 which is part of a scenic loop drive called the Baccalieu Trail and passed by towns with names such as Dildo, Heart's Desire, and Heart's Content. At Heart's Content we stopped off at the Cable Station, a Provincial Historic Site where the first transatlantic submarine cable landed in 1866 after being laid on the ocean floor from Valentia in Ireland (a distance of nearly 2900 kilometres or 1800 miles). The Great Eastern was the ship chosen for the task of laying the submarine cable which would make Newfoundland a crucial link between the old and new worlds. It is a very interesting visit and you actually see where the cable enters the station plus, across the road you can see where the cable comes ashore.

After a quick visit to the Heart's Content Lighthouse we made tracks to the campground in Winterton since the weather had deteriorated drastically.

These travel blog entries related to Beached Fish And Telegraph Cables In Newfoundland may interest you too:

Nugget Point Lighthouse For Sunset In The Catlins