A Cessna plane is our mode of transport as we take in the sights of Thunder Bay and Lake Superior, Ontario from above. 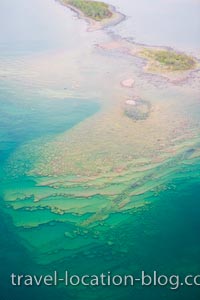 Aerial picture of an island in
Lake Superior, Ontario, Canada.

June 8, 2008:
After another late start - having stayed up all night plus half the morning and finally hitting the hay at 5am, we (actually Guy - because he's the pilot) decided that the weather was fine for flying.

Gathering up our things we head off first to collect the keys to the plane. It was quite funny to us - you don't expect to see plane keys hanging up on the hook alongside the car keys. We picked up the keys labeled "plane", and headed off to the airport.

Soon after we arrived at the airport, Guy was inspecting the plane, then we were climbing aboard to take to the air. The clouds had rolled back in by the time we were taxiing down the runway but nevertheless we continued on towards our first landmark - Mount McKay, a prominent and outstanding feature in Thunder Bay. We explored the landscape behind Mount McKay with Guy lining Rolf up for a aerial picture of the Sleeping Giant Provincial Park with a canyon in the foreground. Heading back in the direction of Thunder Bay we hug the coastline of Lake Superior and get a full view of the interesting cliffs with ancient columns of rock that make up the shores of this great lake.

Next was a bird's eye view of the city of Thunder Bay and it's industrial waterfront. Thunder Bay is the Northwestern most terminal of the shipping network on the Great Lakes, so it supports an array of industries. Purpose built structures and facilities such as grain elevators, coal pits, pulp and paper mills, and dry docks are just a few found along the waterfront. A gem in the rough, the full service marina is surrounded by park like grounds and of course the sparkling waters of Lake Superior.

After checking out the Terry Fox Monument we headed further north, following the shoreline. The waterfront properties are stunning in these parts and some have their own private jetties. After drooling over some of the exquisite waterfront homes, we headed for the Ouimet Canyon Provincial Park, a park which was established in 1972 and covers an area of nearly 8 square kilometres.

Appearing like a slit in the forested landscape, the Ouimet Canyon is around 2 kilometres in length and is a gaping 150 metres wide. The canyon floor, which dips to 100 metres, plays host to a number of rare arctic and alpine plants which can thrive here because of the much cooler temperatures at the base of the canyon.

The walls of the canyon are framed by columns of volcanic rock - sculpted over time by wind and rain. One well known rock formation called Indian Head can be seen from one of the viewing platforms.

From Ouimet Canyon, Guy flew us over Black Bay and the Sibley Peninsula - home of the Sleeping Giant Provincial Park. The park, which is cloaked in boreal forest, features lakes and high cliffs made of granite. The park is also home to a variety of wildlife such as bears, wolves, fox, moose, lynx, deer plus over 190 species of birds.

Moving on, we head back over Lake Superior. Dotted with islands of every shape and size, the water was so clear that we could see through its surface to the rocky platforms below. It was aerial picture perfect - the beautiful turquoise water of the lake with multiple shades of orange on the rocks below the surface - capped by forested islands.

We have a new found appreciation of this area of Ontario - it is just such a beautiful province - from east to west.

After checking out a few more islands complete with lighthouses, or fishing camps we headed back to the airport. Our plan was to head back out again for sunset later on this evening.

These travel blog entries related to We Take To The Air For Aerial Pictures Of Lake Superior And Environs Ontario may interest you too:

Blog Path: Travel Locations: Canada Travel:
We Take To The Air For Aerial Pictures Of Lake Superior And Environs Ontario